Truly a grain-to-glass distillery, Southern Distilling Company is deeply rooted in heritage matched with boundless innovation in historic Statesville, North Carolina. Operating one of the largest state-of-the-art distilleries in the Southeast, we are conveniently located right off the interstate on I-77 at the I-40 crossroads and we welcome guests for tours & tastings daily on our beautiful 20-acre farm.

For those in the spirits industry, we also offer private label, co-packaging, and contract production. And our spacious tasting room and networked conference room suite are available for event space rental. We love making our quality-crafted, ultra-premium bourbons, rye whiskeys, fruit brandies and other tasty products just for you! 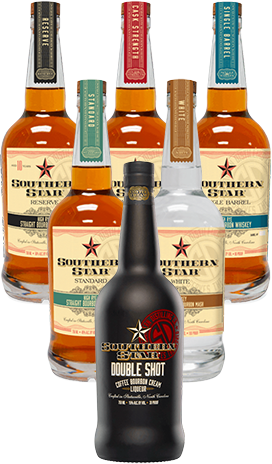 “This is a wonderful win for Southern Distilling Company,” says Vienna Barger, who co-founded the Statesville distillery in 2013 with her husband and business partner Pete Barger. “We love wheated bourbons and chose this mash bill as the first one to distill at our facility. As it reached five years in the barrel and was ready to bottle this year, we were very eager to hear what industry judges had to say about what we believed was an extraordinary bourbon.“

The NYWSC is part of The Tasting Alliance, which oversees numerous competitions and events including the San Francisco World Spirits Competition and Tales of the Cocktail in New Orleans. Panels of judges taste pours double-blind, meaning all judges unanimously and anonymously gave that pour a gold medal, and then it is moved to the best in show round. Southern Star Paragon Cask Strength Single Barrel took top honors in the finals too, joining brands like Uncle Nearest, W. L. Weller and Blanton’s in the elite winners category, as well as being pronounced Best in Class (Single Barrel Bourbon under 10 years) and Best Overall Bourbon.